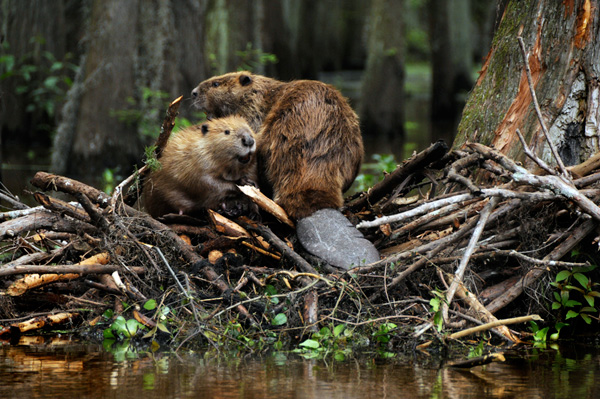 A couple things I’ve learned in my career.  There’s nothing quite like flexibility to manage risk.  And you’re not quite as smart as you might think you are.  Here is perhaps my families’ favorite anecdote about me on the topic.

My wife and I built a log cabin on land we owned in the Big Thicket of Texas.  We were surprised to see that the area just below the cabin became soggy, then marshy, then covered by several feet of water.  On investigating, we found a large beaver dam had been constructed that was backing up the local stream and creating a 20 acre lake.  I promptly tore a 3-foot wide breach in the dam and watch with satisfaction as the water level immediately started to drop.  The next morning I checked the dam and found that the beavers had filled in the breach and strengthened the dam.  I tore it out again, they filled it in again…and this time they ranged far afield and utilized my 2″ x 4″ timbers from the construction pile by the cabin!

My wife was becoming concerned that the beaver lake could expand and drive us out of our cabin.  I pointed out to her that she had a husband with three degrees in science and that the beavers had none!  I noted that the beavers were shy; they avoided coming out when were around and decided that an effigy of me anchored by the dam breach should scare them away.  We made a six-foot look-alike, mounted on a steel rod and stood it on the dam.  It was useless, indeed the scarecrow soon smelled as if the beavers were contemptuously using it as a urination site.  I decided this man/beaver contest was something serious.  I bought a tractor, and purchased 25 feet of corrugated pipe a foot in diameter.  I dragged the pipe a mile from the nearest road by the tractor and took it to the dam area.  I tore out a wide and deep segment of the dam, set the pipe in the base of the breach and anchored one end of the pipe below the dam and the other end in the shoulder-deep water on the up-stream side of the dam.  It worked like a charm!  The water level dropped four feet and as the up-stream end of the pipe was fixed with steel posts two feet off the bottom the beavers couldn’t reach it.  I went on vacation, not a little pleased with myself.

When I returned from vacation I found, to my astonishment, that the beaver lake was as deep as ever before!  When I went to the dam, I couldn’t even see my 25 feet of new pipe; the beavers had deviated from their normal dam width of 4-6 feet in the vicinity of my pipe…widened the dam by 25 feet and buried it ALL under three feet of mud and sticks.  While I was standing in the Texas heat and steaming with anger, a companion made a trial cast with his fishing rod and caught a hungry bass on his firt cast!

I bought a fishing boat, learned to love my new bass lake, and ceded the title of “Master Engineer”… to the beavers.