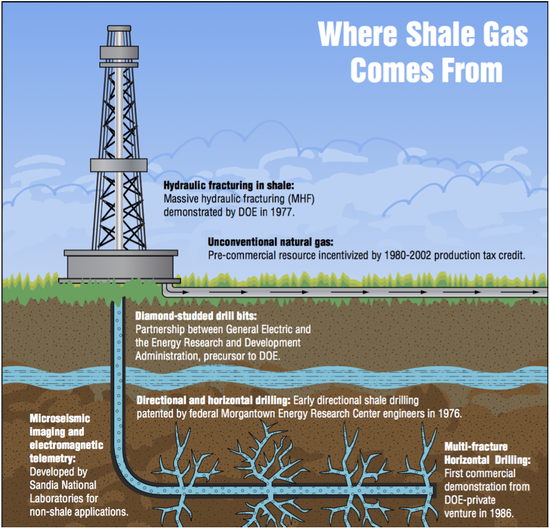 Roxanna Associates, the consulting arm of Roxanna, has been heavily involved in analyzing and selecting shale gas plays for major clients for many years.

The Associates have guided clients to attractive investments in about one million acres of leaseholds. Roxanna Associates has a policy of co-investing in any project recommended to clients; we “put our money where our mouth is”!

Roxanna currently holds over 500,000 acres of working and royalty assets.

In the last ten years, we have gradually come to the recognition that huge quantities of methane gas are recoverable from black shales in the United States of America.

In the more distant past, methane from black, organic-rich shales provided minor amounts of long-lived gas production, especially in the Appalachian area of the eastern United States.  Such production from vertical wells was only marginally economic and was sold for local use.

Advances in horizontal drilling and fracing in a horizontal borehole now yield flow rates of 2 to 15 million cubic feet of gas per day, and with gas prices above US $6 per thousand cubic feet, yield attractive economics to investors.

Modern analytical techniques demonstrate that organic-rich shales commonly have between 50-600 billion cubic feet of gas in place per square mile of surface area.  The amount of gas in place depends linearly on the amount of organic carbon in the rock, and the shale thickness.  The temperature history of the shale powerfully influences the percentage of the contained carbon that is converted to gas.

The geopressuring influences the recovery factor, and the geopressuring of the gas makes the gas shale relatively easy to fracture.  Any silica-rich layers within the shale are especially susceptible to fracturing.

Production from the fractures and the matrix declines rapidly after start of first production.  After a few years of production, strong variations of pressure are developed between areas of the reservoir drained, versus areas undrained, by fractures.  At this time, re-fracturing of the wells causes connection to undrained portions of the reservoir, and significantly restores flow rates.

In every example of gas shale production, the shale horizon was previously penetrated by hundreds of wells, without recognition of the shale’s commercial potential.

I believe that the USA will ultimately recover on the order of one quadrillion cubic feet of gas (approximately 30 trillion cubic meters) from shale reservoirs.