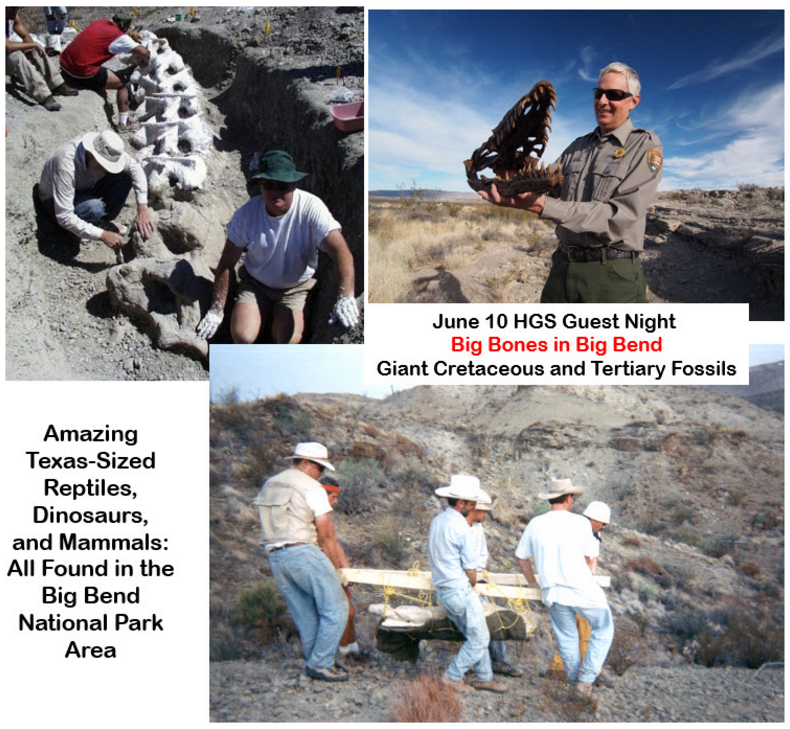 This year’s Guest Night will be held at Houston Museum of Natural Science (HMNS) as usual and we are trying some new ideas. The best thing is that guests can start the evening early. At 6:00 pm, you can go to the Burke Baker Planetarium. Guest Night attendees will have free access the planetarium shows. Planetarium seating is open till seats are filled, with the first show starting at 6:15 pm. A second planetarium show queues up at 6:30 pm to see the 6:45 pm show.  At 7:00 pm Guest Night attendees will be seated on the second floor of the HMNS for dinner. Dinner seating will be among the fantastic exhibits including the Cullen Hall of Gems and Minerals, Hamman Hall Of Texas Coastal Ecology, Farish Hall of Texas Wildlife, and Frensley/Graham Hall of African Wildlife.
At 8:15 pm, guests will enter the Giant Screen Theater to welcome the student award winners of the Engineering and Science Fair, followed by Don Corrick’s talk on “Big Bones in Big Bend.” A post talk 3D movie is included for those who wish to stay late to see the spectacular IMAX experience. HGS thanks the following corporate sponsors: Thunder Exploration, Schlumberger, Roxanna, TGS, ConocoPhillips, Drilling Info, and Walter Oil and Gas Corp.

Featuring:  Don Corrick has been the Park Geologist at Big Bend National Park for the past 15 years.  Don fell in love with the park while he was working in Midland, Texas, as a petroleum geologist for small oil companies, including working for George W. Bush at Arbusto Energy.  After the collapse of oil prices in the mid-1980s, Don left Midland to study archeology at Texas A&M, which led to a summer job as an archeologist in the park in 1990.  For the next 12 years Don worked in the park as an archeologist, while taking care of geological duties “on the side.”  Eventually, geology became a major part of his work load and Don’s job title was changed to Geologist, allowing him to come full circle back to his first love—geology.  Among the major projects that Don has worked on at Big Bend are the 2011 revised geologic map of the park and the just-opened Fossil Discovery Exhibit.  Don holds a B.S. degree in Geology from Baylor University, and a M.S. in Geology from Sul Ross State University.